Measuring the speed of Santa 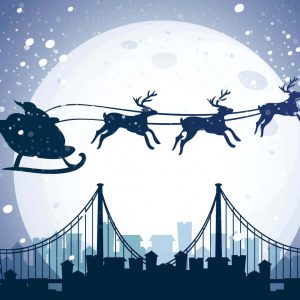 Measuring the speed of Santa

Have you ever thought about the mammoth task that Santa has to complete every year?

Let’s have a closer look at the speeds Santa gets up to. Just how does Santa get around the world so quickly?

Let’s simplify it a bit by just looking at delivering to Australia and New Zealand which is a trip of around 25,000km from the North Pole. The joint Aus/NZ population is around 0.3% of the global population, so assuming everyone gets an equal proportion of Santa’s time, he has about 4.8 minutes to get here and do his deliveries before moving on to other countries.

How fast is that compared to other fast things?

The fastest man-made object is Helios 2, a space probe used to study the sun which reached top speed of 252,792km/hr – a similar speed to Santa but it needed the sun’s gravity to make it happen!

The fastest non-Santa humans were the crew of Apollo 10 reaching 11,000m/s.  That’s the slow lane for Santa and his reindeer!

In our next post we’ll look at the payload of his sleigh…i.e. the weight of all those presents!