Santa and his sleigh – just how heavy is his payload? 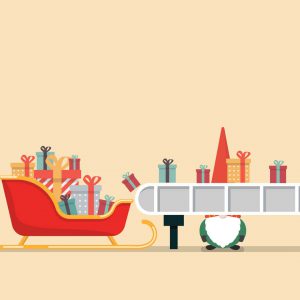 Santa and his sleigh – just how heavy is his payload?

Santa has to carry a lot of presents on his sleigh, what we scientists call a payload. Just how heavy is his sleigh when fully packed?

Let’s start by assuming that Santa needs to pack his sleigh only once. How much stuff is that?

There are roughly 2 billion kids (under 15 years old) in the world today. Santa has a large variety of toys for every culture, so it is a bit hard to say what the total volume of presents he is carting around might be (i.e. how does he fit all that stuff on the sleigh?), but we could estimate a total mass by assuming that on average each child gets 2kg worth of presents (maybe you could weigh yours this year to see if we’re in the right ballpark).

That would mean a total of 4 billion kg, or 4 million tonnes (4Mt). That seems like a lot of mass to be carrying about in a very fast sleigh (we hope he secures it safely!), but how much is it really?

The biggest coal trains you’re likely to see in Australia have around 100 coal trucks, each of which carries up to 85t of coal. So that enormous coal train is carrying around 8,500t of coal or about 0.2% of what Santa might be carrying.

The Seawise Giant was the largest ship ever built and could carry roughly 0.5Mt – so about 1/8 of what Santa needs to stow in his sleigh.

There is no doubt that Santa’s equipment is far more advanced than we can imagine!