Everything you need to know

Step one in the Big Watermelon Experiment is to register your school on the main page. This helps us keep track of how many melons we can expect to be imploded!

Exactly how, and at what pace, you move through the rest of the stages below is up to you. The suggested timings are just that, suggestions.

Jump ahead to a lesson

Lesson One – Get Ready…

This is all about getting your heads around what is coming up. There is a little background information (and science) in “Meet the Ingredients”, which explores watermelons and latex rubber bands. There’s also “Getting All Set” which tells you everything you’ll need to think about (and get) for the big implosion day.

Video One – Meet The Ingredients 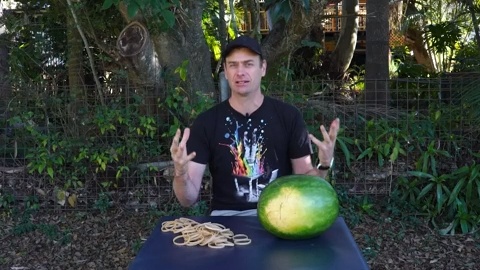 Video Two – Getting All Set Here you’ll find “Teacher’s Tips”, which is pretty self-explanatory. It gives a few insights into things that will make the event run smoothly and help you get the most out of it all.

Setting up and doing it [PDF] Suggested Timing is during Science Week – August 15th to the 23rd

The accompanying Forces and Implosions fact sheet has some higher level maths (such as volumes and densities), and even a small companion experiment designed to measure the stretchiness of your rubber bands (scientifically known as the force constant). 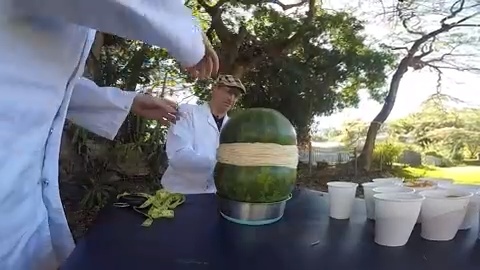 Lesson Four – Wrap it up

Suggested Timing is after Science Week – August 15th or later

What does all this have to do with the real world? Find out in the video “Going Supernova”.

There are also a couple of companion fact sheets courtesy of Melons Australia about how to grow a watermelon, and a little Melon Maths (aimed at School Years  5 – 6)

How to grow a melon [PDF] 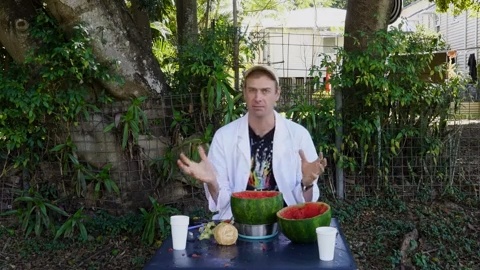 We will provide schools with a way to upload their experiment results, and then make the data set available here for those that are interested. If you have already imploded your melon(s) and are reading this, keep the results safe, we’ll have this going soon.

The Big Watermelon Experiment is being run by Dr Rob and Experimentary, because we love science (you’re welcome).
Do NOT follow this link or you will be banned from the site!