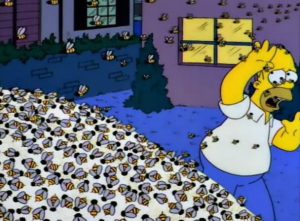 Some animals have some really cool and often quite deadly defense mechanisms.
Take the sea cucumber. These guys eject their own intestines at their enemy, ensnaring them in a web of internal organs, which also happens to contain a poison! Assuming this does the trick, the sea cucumber then spends the next six weeks regenerating those lost organs. Watch a little video about that here:
Or how about the wood frog? These guys have a defense against the harsh cold winter by developing their own anti-freeze, a process which starts with them storing their urine in their bloodstream! When enacted, this antifreeze allows their bodies to become completely frozen (even their hearts and brains)! Check out a cool little video about that here:
And what about Homer’s bees?  Honeybees sting when they feel threatened, or feel the need to defend their hive or food source (like Homer’s pile of sugar).  They attack by using their barbed stinger which then injects a venom into their victim.  Unfortunately the barbs on the stinger mean it is difficult to get out, so often the stinger detaches from the body, and the bee dies soon after.
Humans who are allergic to bees can have a severe (and even fatal) reaction too.
Aren’t animals fascinating!!
*Thanks to Homer Simpson (and Fox) for the quote and the image, and the National Geographic and Smithsonian Channel for the videos.
Published October 12, 2020