There are some truly terrifying sets of chompers on some creatures in the animal kingdom. All serve a purpose, but none of them look too appealing! Take the loggerhead turtle for example – his mouthful of teeth help him keep hold of food such as slippery jellyfish which would otherwise slide right on out. 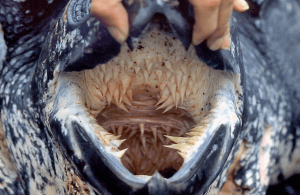 Penguins also need to grab on to slippery fish that are trying to make a “swim” for it.

By the way, penguin “teeth” aren’t really teeth, they’re spines that line their mouths, acting to guide the fish down their throats.  Penguins also use their fierce bite against other penguins when they are trying to defend themselves or their nest. 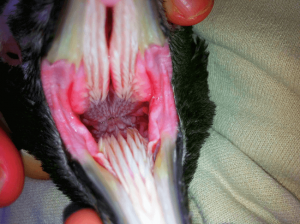 The little guy is a scale worm (and actually he’s quite big in worm terms). Thankfully there’s little chance that we’ll encounter one in day to day life as they live at quite a depth in the cold Antarctic waters (up to 700 metres deep!).  Scale worms can be 20cm long and 10cm wide (see we told you they’re big in worm terms…) and they are believed to be active hunters, hence the need for a good working set of chompers.  Even more fascinating is that their throat is retractable – so pops out when they feed and then back in again when their not! 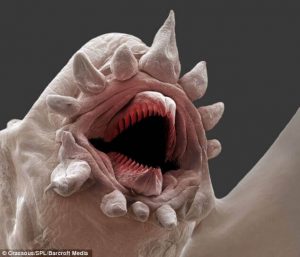 As for geese – well technically they don’t have teeth, but the cartilage they have looks like teeth, and it is as strong as teeth, and that extra row on their tongues helps them to rip vegetation out of the ground. Eeek!  Geese can be quite aggressive and like to attack others (including us humans) to defend their territory or their young.  They don’t seem to mind taking on bigger targets either (after all, most humans are bigger than the average goose). Check out some more animals with scary jaws in this post and thanks to MentalFlare for the images.

Looking for science options for kids?

It’s all right here. Setting yourself up with a FREE trial of Experimentary as...

Keeping the Elves Warm Welcome to the last in our series looking at "The...

Santa Snacks...A.K.A. Cookies and Milk Today we are looking at a very...

See More
Do NOT follow this link or you will be banned from the site!